Experts predict a disruptive shift in automotive towards highly connected cars and autonomously driving vehicles. Motherson Innovations is supporting this trend with solutions for enhanced safety, ergonomics, performance and esthetics.

Behind you becomes in front of you.

Digital image processing technology has become conventional in many areas of people's lives. Motherson Innovations and its sister division SMR are one of the first to have transferred this technology into automotive - to add more safety to rear view systems and to now fully replace conventional mirrors. 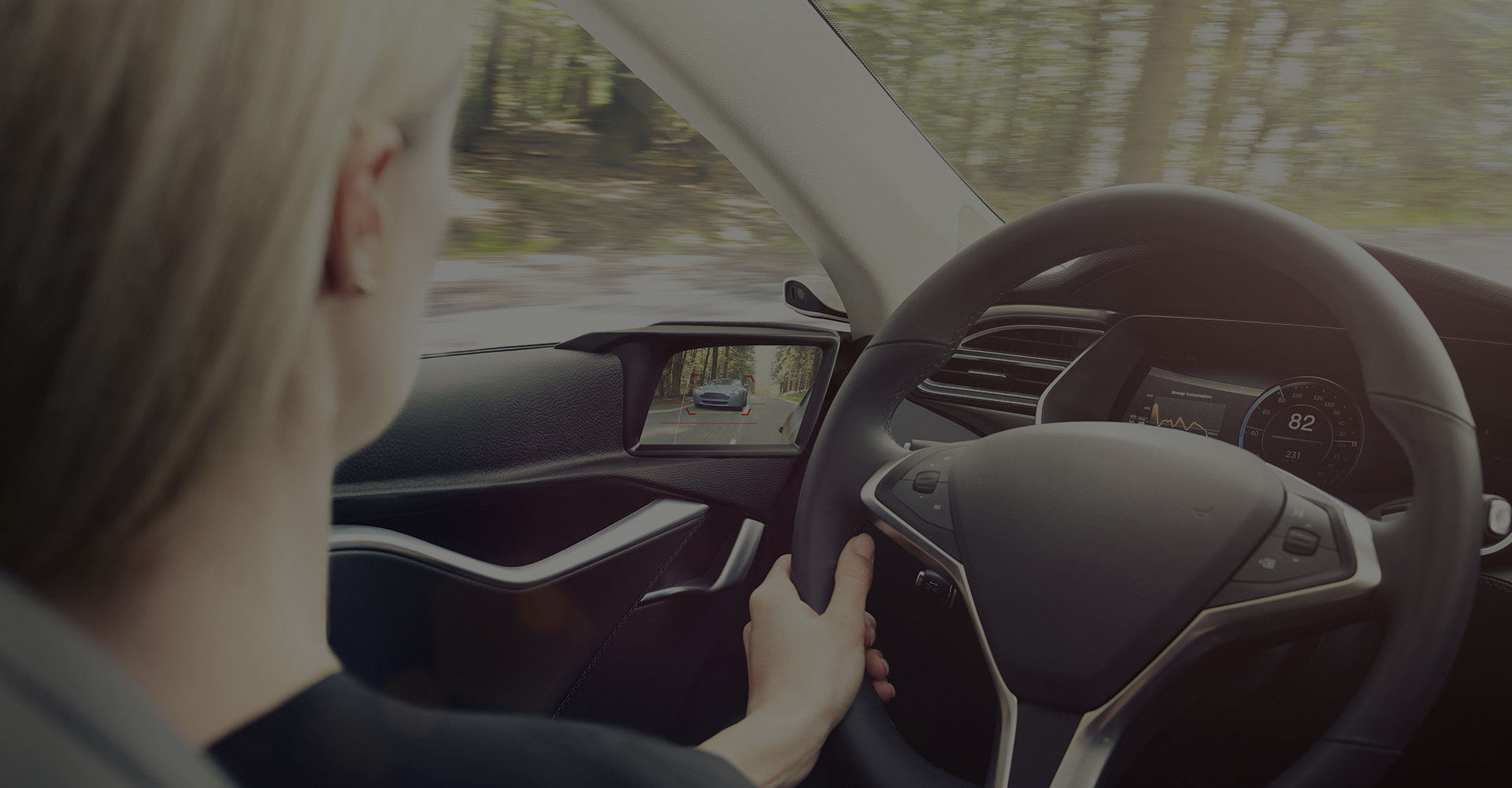 SMR is certain that vehicles without conventional exterior and interior mirrors can be seen on the road in the near future. The expert for mirror and camera systems at the globally operating Samvardhana Motherson Group is working on a serial introduction of digital mirrors. For several years, a global team of specialists consisting of experts from Germany, Australia, England, India, and the USA has been testing various digital rear-view mirrors for passenger cars and trucks, which have been developed in-house using test vehicles on the road. There is a general trend away from simple image-reproduction systems to intelligent, ergonomically optimized systems with integrated object detection and augmented reality, extended security and comfort functions.

Technology and legislation breakthrough in 2016

While the market has lacked automotive-capable technologies that meet the requirements of large-scale production thus far, SMR is now ready. The core piece: a specialized camera and powerful image-processing electronics for the reliable output of ergonomically optimized images to displays inside the vehicle. Legislation now also allows for the progressive replacement of mirrors by cameras, which became effective in Japan and Europe in 2016, and this important step is is under preparation in other relevant regions. Vehicles and products which meet the rules of homologation can thus be granted general operating licenses.

SMR offers a high-tech system approach with globally networked partners and competences. The vision is: “We don’t miss a thing that goes on around the car.” Intelligence is one of SMR’s key competences - from image-data capture to digital processing, risk assessment of the surrounding traffic, and the relaying of situational information to the driver. “With, high quality and ergonomically optimized image reproduction, we want to eliminate the weak points of today’s mirror and vision systems in order to ensure safe and relaxed driving,” says Dr.-Ing. Alexander Slama, Development Manager for Digital Rear-View Mirrors at SMR.

The team is co-operating with several car manufacturers in America, Europe, and Asia with the aim of beginning economic series production of the cutting-edge technology with its enhanced safety features. For this purpose, the team is able to draw on the most extensive experience in the market thus far: SMR's technology for Image based object recognition while driving has been installed and driven in many Volvo models over the last 10 years. 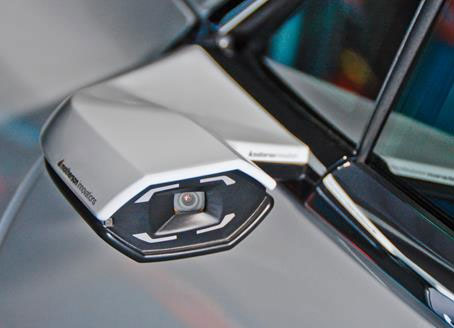 Highly sensitive cameras capture the complex traffic circumstances. Using high-performance image processors, the scenarios are analyzed for potential dangers by means of algorithms and simultaneously displayed on ergonomically optimized screens in the vehicle interior. One interesting optional feature: escalating warning messages that have been intelligently adapted to the driving situation. Using augmented reality, the displays show the danger precisely where it occurs. The system detects near and passing objects, such as vehicles, cyclists, and pedestrians, for example, and warns the driver of potential collisions in advance by way of warning symbols or warning lights. The calculation of the potential collision time and the exact positions of adjacent vehicles in the individual lanes is a key factor in the escalation of the warning. Thus, rear-view systems become useful assistance systems. 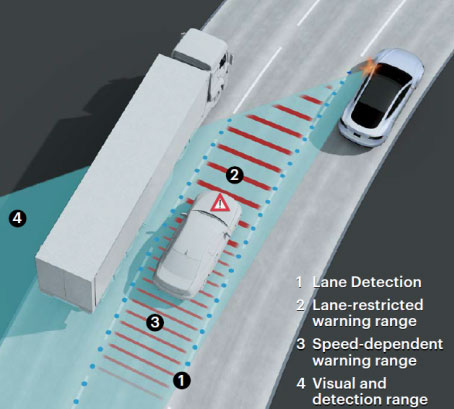 The specially developed HDR cameras (High Dynamic Range) take 60 images per second, process extremely fine contrasts and deliver images that can reproduce large differences in brightness both day and night. High-resolution, anti-reflective HD displays facilitate low-glare and low-reflection images.
In the control units between the cameras and screens, a lot of intelligence can be found in a small space. Per control unit one image processor is responsible for image optimization, object recognition, and augmented reality. The control units are connected to the vehicle electronics via CAN bus and constantly monitor the function of the components for maximum functional safety. The system also has an image detection and contamination detection system: This kind of technology from SMR has been extremely reliable on the road for 10 years.

Why replace mirrors with cameras?

Among other things, some of the reasons for the introduction of digital rear-view mirrors on the part of vehicle manufacturers are the lower weight compared to exterior mirrors and the reduced air resistance, which result in fuel savings. Even water or dirt on the side windows, which has impeded the view of the outside mirrors thus far, is not a problem with cameras, since the displays can be found inside the vehicle, and are thus freely visible in any weather. At the same time, no large exterior mirrors obstruct the view through the front side windows, because the camera modules are significantly smaller than mirrors and can even be arranged so that the driver does not see them at all. When replacing the inside mirror with cameras, the rear window can even be completely omitted. An unbeatable advantage, however, is the possibility of a wide range of visual and ergonomic optimizations, such as brightening the image in the dark, adjusting the viewing angle according to the driving situation, and the dynamic display of information and warnings in the field of vision.

Well-positioned for the future - Everything from a single source

With its subsidiary SMR, a global expert in the field of rear-view and camera-based object recognition systems, the Samvardhana Motherson Group possesses key competences for digital rear-view mirrors as well as development and production sites in all relevant countries. With its largest SMP division, the group is also an expert in cockpits and door panels and is therefore also optimally positioned for the integration of displays, control elements, and electronic modules. In addition, the Samvardhana Motherson Group offers comprehensive competencies for everything that can be incorporated into the camera housing, such as cameras, LED lighting technology, electronics, cabling, high-quality surfaces, and drives. With its numerous product segments, it is a partner of almost all vehicle manufacturers and intensively cooperates with some of them in the field of camera-based environmental sensors and image reproduction systems.

During four years, SMR and Motherson Innovations test vehicles with mirror replacement systems have been in use. The latest test vehicle is based on a Tesla Model S which includes one of many options for configuration: intelligent digital exterior mirrors with object detection and digital interior mirrors with an extended visual range.
An electric vehicle was deliberately chosen as Motherson Group is strategically positioned for electro mobility. The camera modules are attached in the customary mounting positions for visual systems and have been stylistically adapted to modern vehicle design. The displays in the instrument cluster needs getting used to but are very clear thanks to the close positioning of the two viewing fields. In other test vehicles, screens are installed in the door panels or on the A-pillars. The various locations with their respective advantages and disadvantages can be defined together with vehicle manufacturers in order to correspond as far as possible to drivers’ habits.

For the Samvardhana Motherson Group, a global leader in automotive interiors and exteriors, research in new materials and surfaces is key to maintain and further enhance its market position in a highly competitive industry – and a gateway to new market segments. 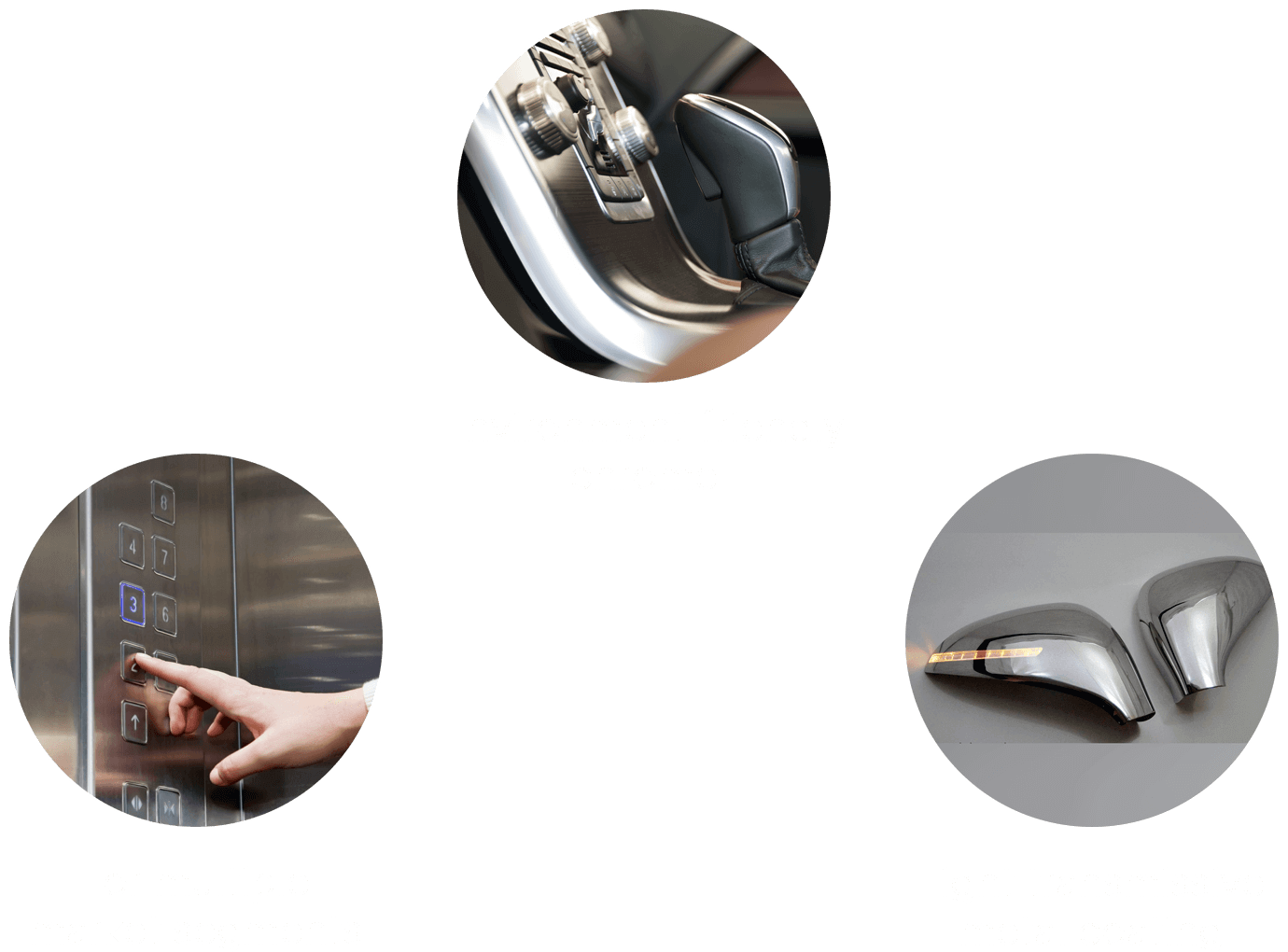 With our Advanced Printing Solutions we are capable for painted or powder-coated instrument panels, self-adhesive front foils and membrane keyboards in polyester or polycarbonate on the basis of high-precision plotting.

Founded as Kobek over 40 years ago, Motherson Innovations is the specialist in screen printing and printing of three-dimensional items formed in a wide array of materials for various fields.

We serve the lighting and automotive industries in particular, printing on glass, acrylic glass and various plastics in a dust-free atmosphere for perfect results that we provide a weatherproof or scratchproof finish if required.

The printing of foil keyboards and other technical screen printing tasks are as much part of our work as milling and laser cutting work in preparation for later installation of the items we produce. 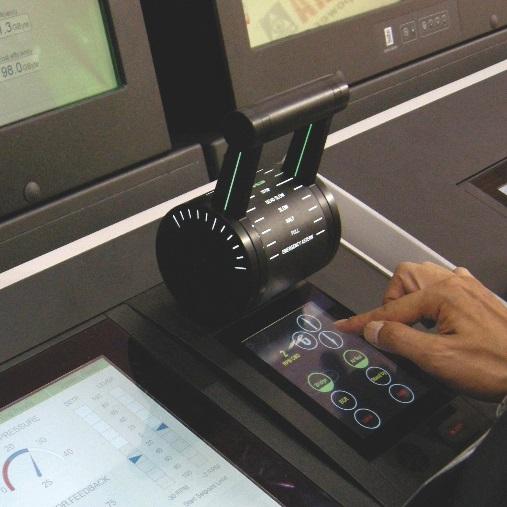 Particular challenges require creative solutions. Putting LED to use in unusual fields is such a challenge. We have developed a system that enables use of LEDs in completely new application areas.

The unusual thing about our unique LED-based solution is that it provides shadow-free and uniform diffused lighting over an entire slim-mount panel. The technology behind this solution is a proprietary development that opens up new design possibilities for buildings, process measuring and the industrial field, for example in the form of never-fail control lamps.

We deliver products completely ready for final assembly and installation, either produced in-house or in coordination with our customers' existing suppliers, depending on requirements and the size of the job.

Many noted companies from the industrial, measuring technology and architectural fields harness our knowledge and leading edge for the quality of their products. 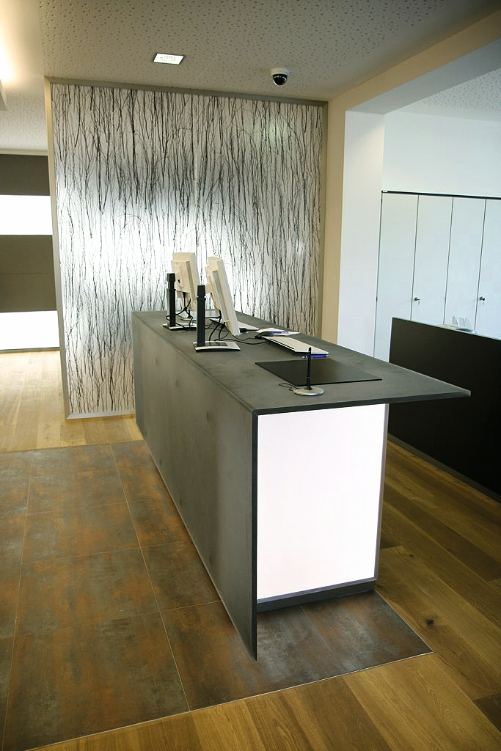 We process products made of Plexiglas® or other plastics in highest quality from the first to last work step. these include dust-free printing, for example with mirror ink, and where required provision of a scratchproof coating as well as precise milling or laser cutting of the item for an exact fit. 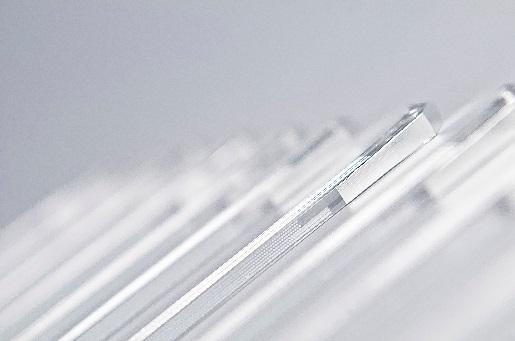 In every apartment, in every house the right lighting plays a central key role. This is the place you can recover from workaday life. This is the place you can realize your very personal ambience. Whether your living room, your bath room, the kitchen or the bed room: the lighting has to be variable, suitable for particular requirements. In our point of view it is even an important part of the interior design of a room.

In collaboration with the great glass artists of "Magma Glasdesign" we realize individual items and make them shine. 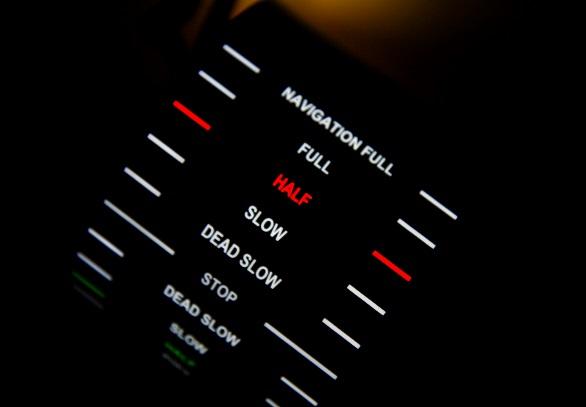 We are a company that grows with the requirements of its customers.

As a result, our development department is able to come up with the right solution for tasks as varied as the following:

The unusual thing about our unique LED-based solution is that it provides shadow-free and uniform diffused lighting over an entire slim-mount panel. The technology behind this solution is a proprietary development that opens up new design possibilities for buildings, process measuring and the industrial field, for example in the form of never-fail control lamps.